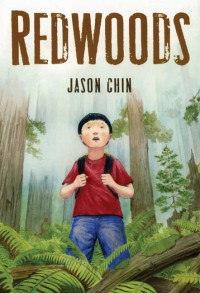 Suitable for: 4 and up

Opening: The coast redwoods are among the oldest trees in the world. Their ancestors lived about 165 million years ago, during the Jurassic period.

Book Summary: When a boy riding the subway finds an abandoned book about redwoods, strange things happen. An ordinary train ride becomes an extraordinary trip to the great and ancient redwood forest.

Links to resources:
Lesson Plan and Activities (suitable for 4th graders and up)
Redwoods Coloring Pages here and here:
Redwood National Park coloring page.
Redwood EdVenture has many websites that teachers and parents can use ranging from kindergarten - high school
Into the Redwood Forest (lesson plans suitable for 3rd-5th grade levels):

Why I like this book:
I was really impressed with this book. Non-fiction at its best! It is filled with amazing facts about redwoods. But what makes this truly a fun book to read, are its illustrations. The illustrations show a boy who goes on a fantastic journey, his world transforming in front of him as he reads about the redwoods. For example when he reads that some redwoods started from seeds during the roman times, he finds two Roman citizens are sitting next to him. When he reads that the trunk of some redwoods are wide enough to let a car through it, he jumps out of the way of a car passing by. When he learns that redwoods can make their own rain, he stands in the middle of an artificial rainfall. This book is the next best thing to being in the redwood forest in person!
Posted by SN Taylor at 1:28 AM