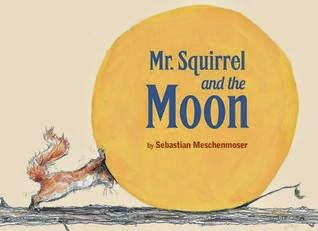 Title:  Mr. Squirrel and the Moon

Opening: One morning Mr. Squirrel woke up because the moon had fallen onto his tree.

Summary: When Mr. Squirrel awakens to find that the moon has landed on his tree, he frantically tries to get rid of it before someone suspects him of stealing it and puts him in jail. But when he rolls the moon off of his tree, it's gets stuck on Mrs. Hedgehog's bristles and when the billy-goat arrives and butts it with his horns . . . Will the moon ever be the same again?

Resources:
A few extended learning activities could include learning about the moon and moon phases as you see at least three of them in the book.

Learn about squirrels, their habitat, what they really like to eat and enjoy some squirrel crafts here and here.

My Review:
What would you do if the moon landed on your doorstep or just outside your window?
This was a really cute story. A squirrel is awakened when what he thinks is the moon crashes onto his tree. He frantically tries to get rid of it so that he is not suspected to be the thief. What ensues next are hilarious ways other animals in the woods get involved and how they eventually send the "moon" back to where it belongs. I enjoyed the very engaging artwork and the humorous antics of the different animals! Children learn basic teamwork and problem solving skills following the misadventures of Mr. Squirrel and his woodland neighbors.

****
Disclaimer: I received an egalley of this book from the publisher for my honest review. The book will be published in January of 2015.
Posted by SN Taylor at 12:00 AM

This sounds like a lot of fun. As muchas I may curse the neighborhood tree rats, they're antics do make me laugh!

This looks really cute. I can only imagine the lengths to which squirrel will go to get that moon unstuck from his tree.