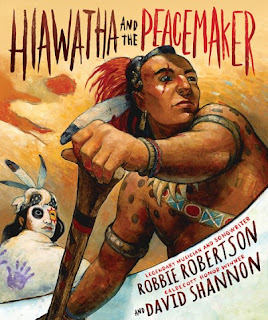 Title: Hiawatha and the Peacemaker

Opening: A fierce scream echoed through the woods....Was it a dream?

Summary: Hiawatha was a strong and articulate Mohawk who was chosen to translate the Peacemaker’s message of unity for the five warring Iroquois nations during the 14th century. This message not only succeeded in uniting the tribes but also forever changed how the Iroquois governed themselves—a blueprint for democracy that would later inspire the authors of the U.S. Constitution.

Resources:
A guide for educators can be found here. It covers a wide range of topic from the creation of the Iroquois Confederacy, the history of the various nations, native life at that time and the 'clan' system and how it was run, the peacemaker's story, the tradition of the wampum and Hiawatha belt, and so much more.

Why I Like the Book:
It is always a joy to read about history told from the perspective of the native people of America. So much is lost and rewritten when someone else tells or writes your story, as is evident when the author hears Longfella's poem describing Hiawatha and even as a child he knew the man got the story wrong.

Told in first person from Hiawatha's point of view, it tells of his journey towards peace and forgiveness as he joins the peacemaker to unite the five warring Iroquois nations: Mohawk, Cayuga, Onodaga, Seneca, and Oneida tribes into the People of the Long House. Having suffered heavily by the hands of the cruel chief of the Onodaga tribe, Hiawatha is chosen to help the peacemaker spread the word of a new great law to help govern the tribes and bring peace and unity to the nations.

Native Americans have a tradition of oral storytelling and this book is a written manifestation of that culture and heritage of passing down stories and histories of their great past. So much information is packed in the author's note in the back of the book, it prompted me to go further and look into the story of Hiawatha and the peacemaker and how they formed the Iroquois Confederacy and bringing peace to their warring nations.

The illustrations were bold and beautiful. Note: some of the illustrations could be disturbing for young (non)readers, such as the white-painted face of the peacemaker, the first page shows the carnage Hiawatha finds his village after it was raided, and the picture of the villain, Chief Tadodaho, represented as a hideous creature with scaly skin and snakes on his head.