A-Z Challenge: G is for The Grand Mosque of Paris 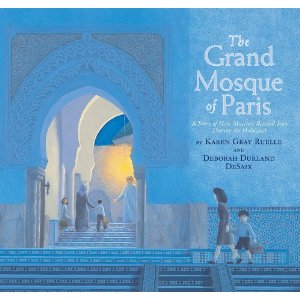 Title: The Grand Mosque of Paris
Author:  Karen Gray Ruelle
Illustrator: Deborah Durland Desaix
Publisher: Holiday House, Aug 1 2009
Ages: 8 and up
Theme/Topics: Holocaust, Courage, Survival, Hope, Rescue, Muslims, Jews
Opening:
“Save one life, and it is as if you’ve saved all of humanity.”
Summary:
When the Nazis occupied Paris, no Jew was safe from arrest and deportation. Few Parisians were willing to risk their own lives to help. Yet during that perilous time, many Jews found refuge in an unlikely place--the sprawling complex of the Grand Mosque of Paris. Not just a place of worship but a community center, this hive of activity was an ideal temporary hiding place for escaped prisoners of war and Jews of all ages, especially children.
Beautifully illustrated and thoroughly researched, this compelling book reveals the almost unknown story of how French Muslims' courage, faith, and devotion to justice saved the lives of so many Jews.
Resources:
The publisher provides an excellent Educator’s Guide.
Why I like this book:
These days there is so much turmoil in the Middle East, the whole world for that matter, this story is greatly needed to show that at the end of the day, we are all brothers and sisters in humanity. And when one person hurts because of oppression, we all hurt. This book tells a story of oppression, fear, survival, courage, and most importantly, brotherhood and hope. A story that is not told in history books. This is a great book to add to the study of the Jewish holocaust. It adds to the story of their struggle, plight, sacrifice and also their survival with the help of a few brave French Muslims.
Posted by SN Taylor at 1:52 AM