A-Z Challenge: E is for The Empty Pot 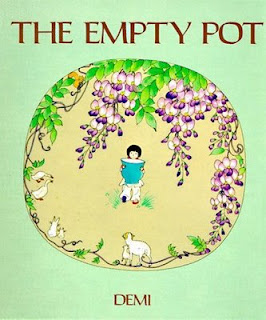 Author: Demi
Illustrator: Demi
Publisher: Square Fish, September 15, 1996
Ages: 4 and up
Theme/Topic: honesty, bravery, Integrity, consequences, virtue,
Opening:
A long time ago in China there was a boy named Ping who loved flowers. Anything he planted burst into bloom. Up cam flowers, bushes, and even big fruit trees, as if by magic!
Summary:
When the Chinese emperor proclaims that his successor will be the child who grows the most beautiful flowers from the seeds the emperor distributes, Ping is overjoyed. Like the emperor, he loves flowers and anything he plants bursts into bloom. But the emperor's seed will not grow, despite months of loving care, and Ping goes before the emperor carrying only his empty pot. The emperor ignores the beautiful blossoms brought by the other children and chooses Ping, revealing that the seeds he handed out had been cooked and could not grow.
Resources:
This site has wonderful extension ideas and activities.  Homeshare has another wonderful lesson plan to go with this book. (Note, I believe this may be a Christian site as they have a section bible related but it includes lots of fun activities for math, science, social studies and more.)  More lesson activities including a fill in the blank worksheet.
Lessons about honesty
Why I like this book:
I love folk tales from other cultures. This one teaches children to be honest and the importance of integrity, honesty and accountability. I love that the father encourages the son to accept the fact that he worked really hard on trying to grow his seeds and to accept that he did his best. He did not suggest for Ping to cheat but to take his empty pot to the emperor. Children learn about consequences as well. The children who cheated did not win the emperor’s approval or his throne. But Ping won through his honesty, integrity and virtue.
Posted by SN Taylor at 11:45 PM