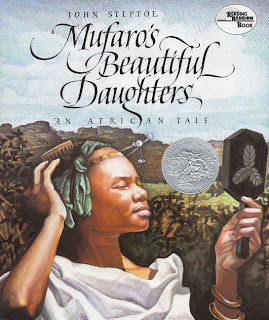 
A Long Time Ago, in a certain place in Africa, a small village lay across a fiver and half a day’s journey from a city where a great king lived. A man named Mufaro lived in this village with his two daughters, who were called Manyara and Nyasha. Everyone agreed that Manyara and Nyasha were very beautiful.


Both of Mufaro's daughters are beautiful but one is bad tempered and one is kind. When the king of the land asks the daughters to appear before him so he can choose a queen, the prideful, bad tempered daughter decides to set out in the night so she can get there first. Along the path are many opportunities to show one's true character. The kind daughter who follows the same path the next day makes different decisions - with different results and a surprising ending!


Lesson Plan with before and after activities


Discussion points at Learning to Give


This is another book from my childhood. What stood out the most for me were the illustrations and how they captured the imagination and transported me to Mufaro’s village somewhere in Africa. Naturally, Nyasha was my favorite character; she was sweet, kind (she let her sister live in the palace with her) and so pretty AND she marries the king in the end! Who does not like happy endings!?! :D
Posted by SN Taylor at 1:40 PM