Recommended Picture Book: Keep Your Ear on the Ball 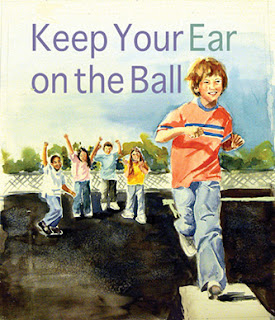 Title: Keep Your Ear on the Ball

Opening:
Davey looked like every other new kid that ever came into our class. Ms. Madison walked him in and said, "Boys and girls, this is Davey." He was medium height. He had medium brown hair and medium brown eyes. A regular kid.

Summary:
Everybody wants to help Davey. But Davey has one answer for all, "Thanks, but no thanks." Davey is blind; however, he is perfectly capable of doing everything on his own. His well- meaning classmates stop offering help when they see how able Davey is. They respect his self-reliance?until he tries to play kickball. After several missed kicks and a trampled base keeper, no one wants Davey on his team.

Working together, the children figure out a way to offer help that respects Davey's unique abilities and his desire for freedom.

I must confess, I teared up at the end of this book *grin* it is such a wonderful story that teaches children the value and importance of interdependence and independence. It is a great gift to be able to help someone, especially a friend with a disability. But it is an even greater gift to be able to help someone help by allowing them to do things for themselves but still be there for them. In this story, Davey's classmates do just that! They learn that he is quite capable of even kick ball when they give him a chance, and a genius plan that allows Davey to prove his abilities :D This book is a great addition to any home or classroom library. It offers a great opportunity to explore and learn more about disabilities like visual impairment and how to respond to the visually impaired with respect.

Cool, a book by Genevieve Petrillo. This looks like a wonderful book with a message we can all learn.

So wonderful to see this book reviewed and added to our Perfect Picture Book list! Genevieve Petrillo is one of our 12x12 in 2012 online writing community, so it's particularly exciting to see her book featured. Thank you!

I have not read this book yet, but it sounds excellent. It is such a fine line, respecting an individual for who they are, knowing when to help and when that help is not appropriate. Thanks for posting this one!

The perfect choice for this season of the paralympics. I do love this story!

Thanks ladies, it really is a wonderful book that teaches us all to respect and know when to step in and when to allow an individual to do for themselves.

@Beth Yes, I actually went through our list and searched for 12x12x12 authors :D

Thanks for the mention! "They" say write what you know, so that's what I did. The "real" David and his classmates were just as inspiring as my fictionalized characters.

I am a big fan of this book. Genevieve Petrillo wrote such a beautiful story and allow the kids to solve the problem. Great writing! Love the illustrations too.

Though I have yet to read this book, I love Genevieve and Cupcake and I know they'll be thrilled to be featured on PPBF! Thanks for sharing :)

What a wonderful message. Thanks for highlighting this book.

I am the illustrator of this book and can't thank you enough for recommending it. I found a school where visually impaired students were in the regular classrooms and used one such class as my models. We had so much fun, and the "star" got to demonstrate his Braille writer to the whole class.

This sounds like a wonderful book with a needed message. I look forward to reading it and appreciate your review.