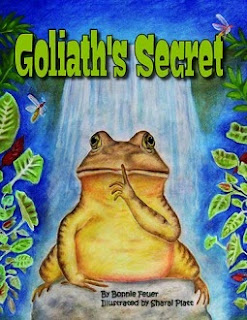 Book Summary: Near a waterfall in the lush West African forest, seven animals come across the wonderful, but silent, Goliath Frog. They all feel sorry for this giant, believing that he is unable to communicate. In rhyme and prose the West African animals describe the unique ways in which they communicate with one another. Using objects found in nature, they also try to help Goliath find his own voice. The caring animals are disappointed when the frog does not respond.... until he reveals his own surprising secret.

Resources:A glossary is included at the end of the book. It can be used to make word searches and crossword puzzles.
Suggested Discussion Topics: How do animals communicate? How do humans communicate? What are some ways different cultures communicate?
The subject of the book is communication. It would be fun to find new ways to communicate with each other. Let children make up a new way to communicate.

Why I Like This Book: A gentle story that introduces the concept of speech and communication as well as the different ways animals communicate with each other. Goliath the frog is mute. All the other animals feel awful he can't speak and do their best to teach him their form of communication. But they learn the biggest lesson of all. "All creatures communicate in their own way" even a mute frog. I thought it was quite interesting to note that Goliath would become interested in the different ways each animal presented their form of communication, like the dancing cranes, flashing fireflies and more, but the minute they tried to teach him to ‘speak’, Goliath would become dis-interested and return to his rock. The author did a wonderful job weaving facts about each animal Goliath meets and their unique form of communication as well as the importance of respect and being open-minded when meeting other with different abilities. Goliath’s Secret makes an excellent addition to Pre-K and Kindergarten classroom libraries. It can also be a wonderful resource when studying African animals. A glossary is at the end of the story to explain new words.