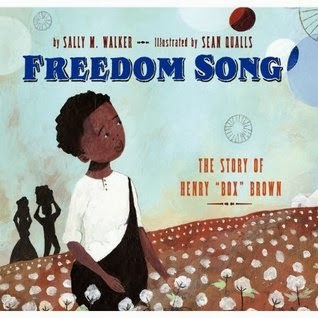 Opening: When Henry Brown came into this world, his family sang.

Summary: Henry “Box” Brown was a slave in the 1800’s on a plantation near Richmond, Va. Song was an important part of his life and he sang for all aspects of it. When Henry’s wife and children were sold to another master, Henry’s song stopped. And in the silence, he thought of an ingenious way to escape slavery and find freedom.

Resources:
While not related to this book directly, Virginia Memory has an excellent Lesson Plan for the study of Henry "Box" Brown. What to know more about the underground railroad? Check out this website for a guided tour.

What I like about the book:
How far would you go to escape brutality, humiliation, cruelty and suffering? What would you do to be free?  I am in awe of the courage and daring plan Henry "Box" Brown used to escape slavery. This book is an excellent additional reading when studying slavery, the underground railroad and freedom stories. Even though most of the book details his journey to freedom as an adult, it is told in a voice that children will appreciate and follow.