Recommended Picture Book: When I Was Eight 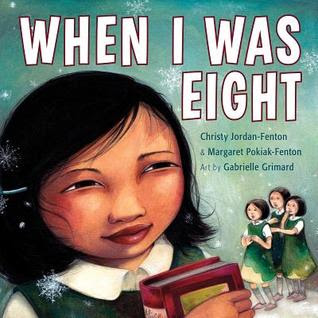 Title:  When I Was Eight

Opening: I knew many things when I was eight.

"Nothing will stop a strong-minded young Inuit girl from learning how to read."

Olemaun is eight and knows a lot of things. But she does not know how to read. She must travel to the outsiders' school to learn, ignoring her father's warning of what will happen there.

The nuns at the school take her Inuit name and call her Margaret. They cut off her long hair and force her to do chores. She has only one thing left -- a book about a girl named Alice, who falls down a rabbit hole.

Margaret's tenacious character draws the attention of a black-cloaked nun who tries to break her spirit at every turn. But she is more determined than ever to read.

By the end, Margaret knows that, like Alice, she has traveled to a faraway land and stood against a tyrant, proving herself to be brave and clever.Resources:
Discuss the importance of being able to read. Why did Olemaun want to read so bad? What did she do to practice? How was she treated at the school? What did the nuns take away from Olemaun? Was if fair? Why do you think they changed her name, cut her hair, take away her parka?
Research and learn more about the Inuit people and their culture: Here is an easy to follow fact-filled page about the Inuit people
This site has a resourceful page with many links about the Inuit Culture.
Inuit Coloring Pages and Art can be found here. :


I was deeply moved by this wonderful story about a young girl’s strong determination and dedication to learn how to read despite the odds against her. I love “When I Was Eight” and I love the young girl telling the story. Olemaun, an eight year old Inuit, is the young heroine in this re-telling of "Fatty Legs" a story written for older children.
Olemaun knows many things at the age of eight but she does not know how to read. Olemaun knows that it is important to not only know how to understand the outsiders but to also know how to read in their language as well. She also wants to read the book her sister always reads to her. The book called, “Alice.” So she decides to ask her father to let her go to their school. He first resists as he knows what it is really like at the school for young Inuit children who attend the catholic school. But for some reason he does not tell her. Despite his objections, Olemaun continues to push the matter until he allows her to go to school to learn how to read. Only things don’t go as she plans.
The nuns are very cruel and hard-hearted, they do their best to break her spirit. Even the other girls are not very nice to her. But Olemaun is strong, she does not let them make her quit or feel defeated. She uses every opportunity she can to practice until one day, she is able to read her most prized possession of all, the book her sister gave her.
I could not get enough of this remarkable young girl. She made me laugh, she made me cry and she made me shake my finger at the mean characters. But most of all, she made me proud of her strength and accomplishments despite her ill-wishers. This is a MUST have book in all home and classroom libraries.
When I Was Eight sheds a quiet yet powerful look at residential schools and the treatment of native children in the Americas.
*Reviewed from digital galley received from Netgalley and Annick Press
Posted by SN Taylor at 12:00 AM

You might like the chapter book The Year of Miss Agnes which has a similar theme. Thanks so much for linking up to the Multicultural Children's Book Day linky!