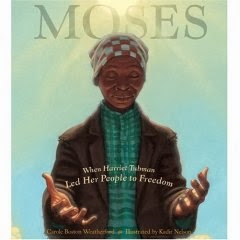 Title: Moses: When Harriet Tubman Led Her People to Freedom

Opening: On a summer's night, Harriet gazes at the sky and talks to God.

Summary: Carol Boston Weatherford poetically describes Harriet Tubman's spiritual journey as she hears the voice of God guiding her North to freedom on that very first trip to escape slavery. Tubman, courageous and compassionate, and deeply religious, would take 19 subsequent trips back South, never being caught, but none as profound as this first.

What I like about the book:
At one point in our lives, we have all read the story of Harriet Tubman. I have read many books dedicated to the courage and dedication of this African-American heroine. But I have never read it the way this author tells her story. I learned that Harriet Tubman was often afflicted with seizures and black outs due to a traumatic head injury caused by her slave master. She also had visions and dreams that she attributed to God since she was a religious woman. In "Moses," the author beautifully captures that faithful relationship between Harriet Tubman and God as she seeks freedom first for herself and then her family. Throughout the book, there is this constant spiritual connection, dialog between them from the beginning to the end.  The illustrations were equally thoughtful and compelling.
Posted by SN Taylor at 12:00 AM